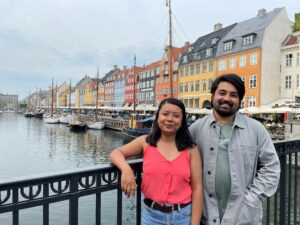 ‘Cultural Differences -far from home’ is a presentation presented by Ronisha and Sujit, two young Nepalese who have lived in Denmark for a few years. They both came to Denmark to pursue higher education, but they had no idea how much the cultural differences would affect their lives. Being alone and away from home is difficult. Sujit and Ronisha have been doing this for a few years, regardless of the fact that they are from the same country and have completely different perspectives. Both of them struggled and continue to struggle to adjust to a new culture, people, food, and, of course, weather in Denmark during their initial days.

Ronisha Shrestha, a Nepalese woman 26 years old, moved to Denmark in September 2019 to pursue a Master’s degree in Culture, Communication, and Globalization at Aalborg University. Ronisha’s initial days in Denmark were challenging being far away from her family and living in a different country with new people and culture. Despite this, she never lost hope and changed her perspective to see everything as a once-in-a-lifetime opportunity. Since November 2021, she is working with ‘Jysk landsbyudvikling i Nepal’ on a women empowerment project called “Madi Girl Power”.

Sujit Shrestha, aged 27, years like many other ordinary Nepalese youngsters with a fantasy of living abroad, landed in Denmark in August 2017 with an aim of pursuing his tourism studies. During four and half years of living in Denmark, he has acquired different experiences of ups and downs in various aspects of his life ranging from academic, social, and personal. These experiences had led him to see the world through different lenses, which would have been otherwise if glanced only from Nepalese cultural contextual settings. Now in his early thirties, he is doing his Master in Tourism at Aalborg University, Copenhagen Campus and is due to finish the study by July 2023 before moving and resettling back to his homeland Nepal.